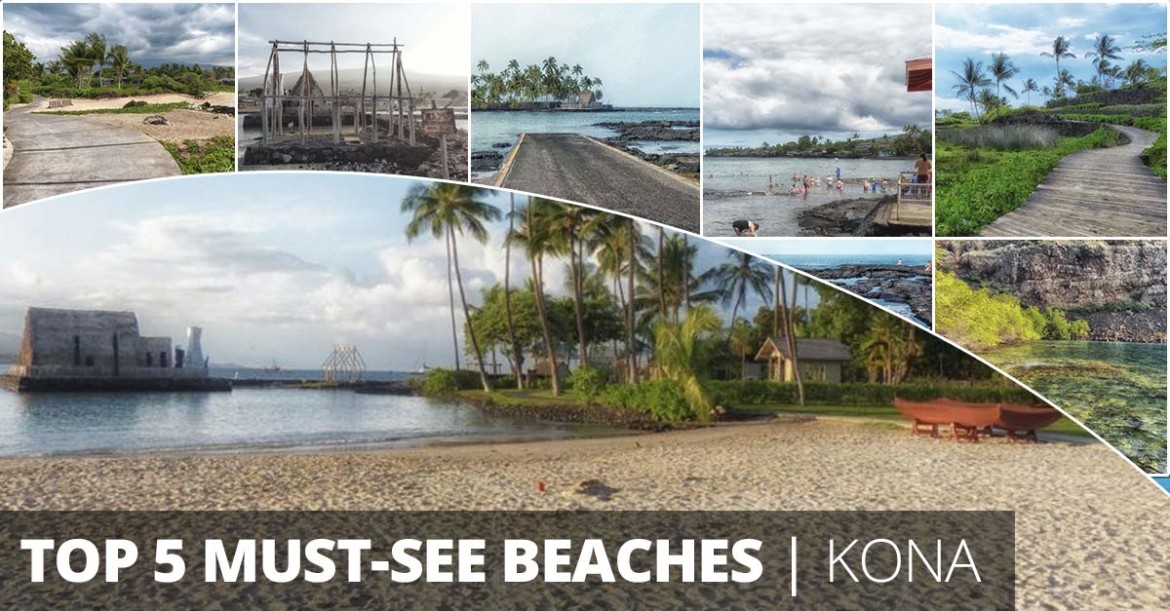 Are you planning a trip to the Big Island? Read about these five can’t-miss Kona beaches, and turn your vacation brainstorm into a gentle rain. Check out the best spots to snorkel, rest, and even take in a bit of Hawaiian history. Are you ready? Let’s go!

Kahalu’u is one of the best Kona beaches for anyone who wants to go snorkeling, especially those new to the sport.  The shallow water there ensures that you are close to the fish you’d like to spend time with.  This place is also protected by a break offshore, so the visibility is almost always good regardless of the ocean conditions outside.  Kahalu’u is probably the most popular of the Kona beaches, but that doesn’t detract from it at all.  Because people love it so much, there are restrooms, shade, lifeguards, several food trucks, and plenty of parking!

Kahalu’u hosts an enthusiastic group of reef education specialists, too!  You won’t find these teachers on other Kona beaches.  Because the life in our ocean has always excited me, this is probably my favorite aspects of this beach.  These volunteers stand on the shore to describe the fishes and other organisms inhabiting the water.  They will help you to recognize what you are seeing beyond the animals’ rainbow of colors.  They’ll also explain how to care for the habitat you’ll be swimming in.  A coral reef is a bit like a living museum, so it’s best not to touch anything.  Feel free to bring a whole list of questions; these folks will love answering you!

You’ll want snorkel equipment to play at Kahalu’u, of course.  One plan to save money (and return-trip luggage space) is to rent the good stuff at Boss Frog’s Dive and Surf.  Walk-ins are welcome, and you can also rent snorkel gear and underwater cameras online, before you get to the island!  Boss Frog’s is in the heart of Kona town, just 15 minutes from Kahalu’u. 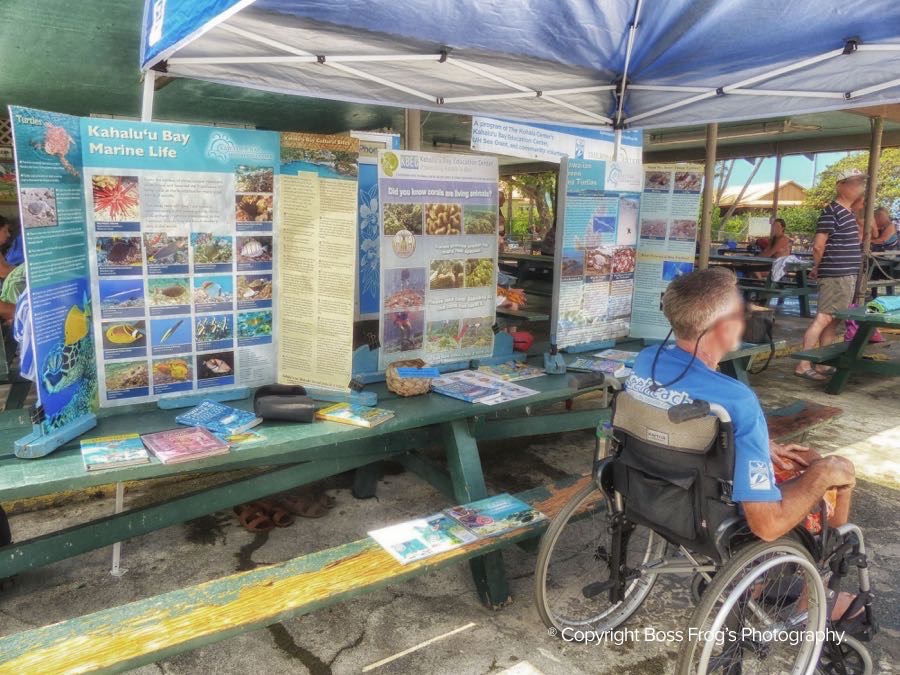 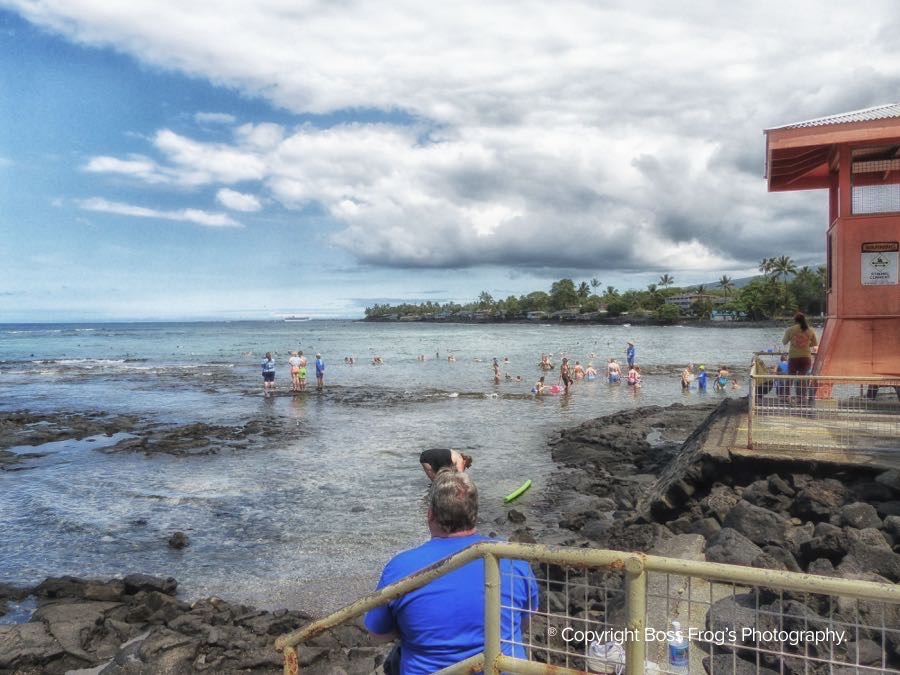 Kealakekua Bay is where the future King Kamehameha met the future Captain George Vancouver.  That time period (1778-1779) was beyond influential in the path of Hawaiian history, because the island kingdom began to have prolonged contact with Europeans.  Kealakekua translates to “Path to the Gods,” which is one reason Captain Cook was mistaken for the Hawaiian god of peace and agriculture.  This bay, protected from the large swells and weather of the open ocean, is where Captain Cook first dropped anchor off the Big Island.  The Hawaiians originally perceived the event as a joyous one.  Today, you will find a monument to Captain Cook on the shores of the bay.

I’ll be honest: Kealakekua Bay isn’t one of the Kona beaches per sand, but there was no way I could skip it when crafting this list.  I had never seen such beautiful water on the Big Island!  This place is not only chock full of history, there’s a ton of life here, too.  It’s a Marine Life Conservation District (no fishing or collecting is allowed), and the only ways you can see the place are to arrive by tour boat, kayak, or a super intense hike.

I’ve done that Kona hike, and I (gasp, wheeze, sweat) highly recommend sailing in, instead.  The sun-beaten jagged shoreline of Kealakekua Bay offers few comforts, but a boat tour provides shade, delicious food, restrooms, snorkeling equipment, flotation devices, and a helpful, safety-conscious captain and crew for you and your family.

If you go by boat, the crew will let you know how to get in and where to snorkel.  They’ll be watching out for you, and that is an excellent thing.  The morning I slipped into the water, I found the visibility to be over 80 feet, which is very good.  The shallow reefs were especially full of activity, but there were brightly-colored fishes and large corals interacting everywhere. 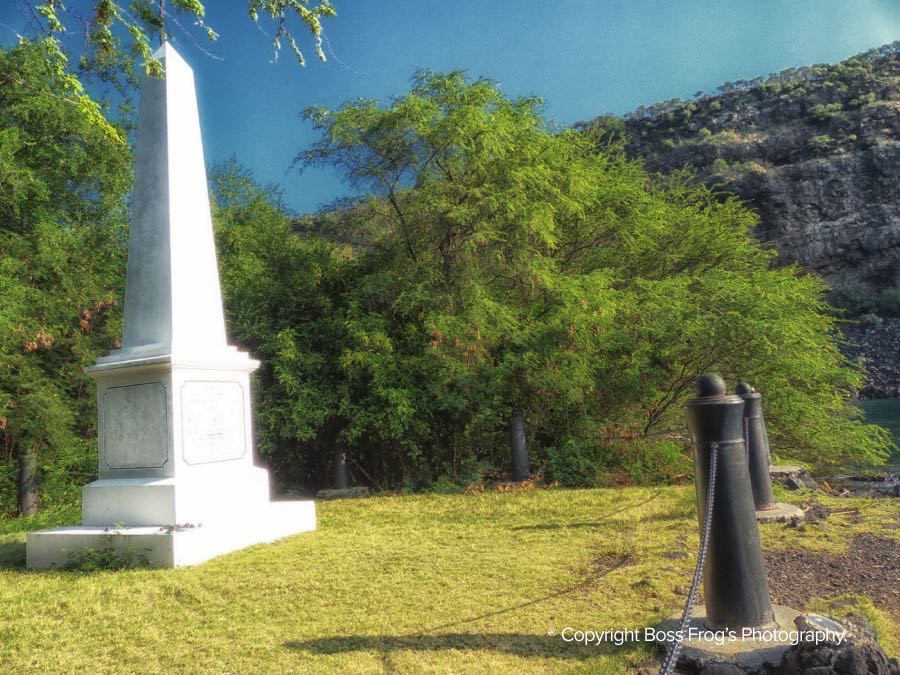 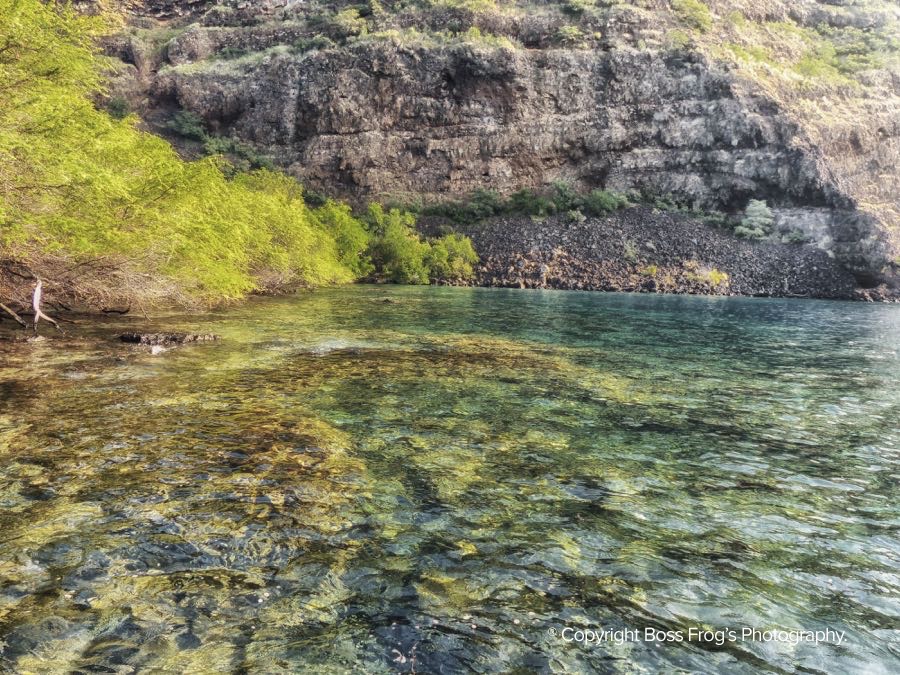 Don’t underestimate this smallest of Kona beaches. Quiet, shallow waters have swooshed their way in above a sea floor that is sandy at first, and gives way to slate and lava rock farther out.  Snorkeling here is a lot of fun, especially along the edges of the stone walls on either side.  Here is a safety tip for this location: Do not swim out toward the pier.  I would prefer that you were not hit by a boat.  Also, when I went past the heiau myself to check things out (Do as I say, not as I do, okay?), I discovered that the fish species on the ocean side of the structure aren’t any different from those close to shore.

This small slice of coastline – also known as Kamakahonu, sits right outside the Courtyard King Kamehameha’s Kona Beach Hotel.  If you’ll be driving from somewhere farther away, park in the free lot to the left of the Kona Seaside Hotel at 75-5665 Likana Lane, Kailua-Kona, HI 96740.  Once you’ve collected your snorkeling gear and family members, walk through the Banyan Court Mall, across the main drag, and down past the Kailua Pier to find the sand.

Even though this Kona beach is in the middle of a bustling town, the region’s history is clearly present.  A reconstruction of King Kamehameha’s personal heiau (temple) is on the shore here.  You’ll love taking photos, and imagining what life may have been like back then.  In order to respect this place now, do not walk inside the temple.  Doing so is kapu (taboo).  In ancient Hawaii, depending on the offense, you could be killed for breaking kapu.  A few of many infractions back in the day covered men and women eating together, a commoner looking at a chief’s back as the leader passed by, and women eating bananas.

To immerse yourself in Hawaiian history and legend, and to eat more than you ever thought possible (bananas included), attend one or both of the sunset luaus taking place within a mile of each other near this Kona beach.  Enjoy! 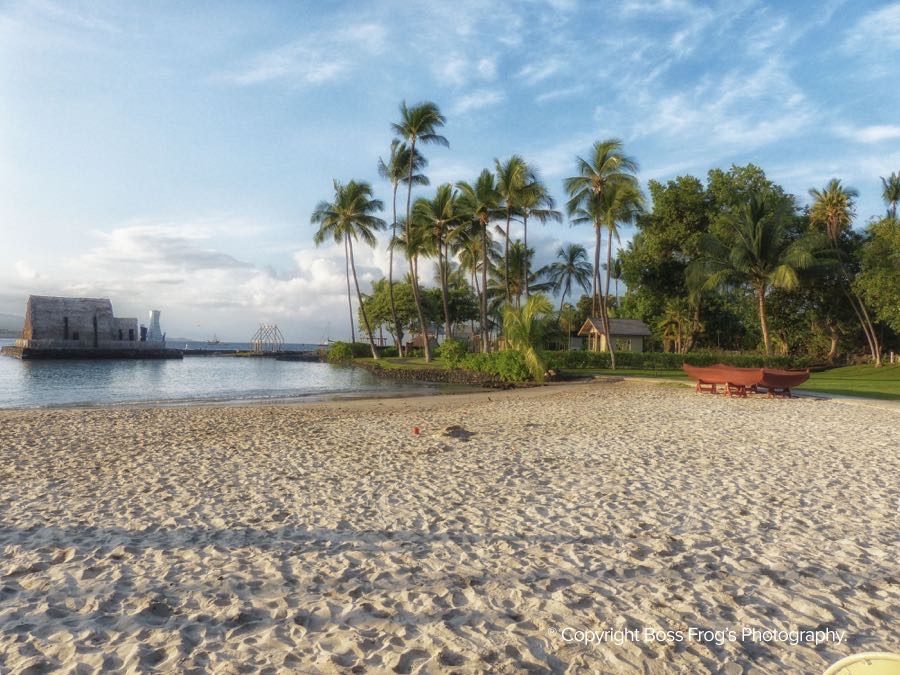 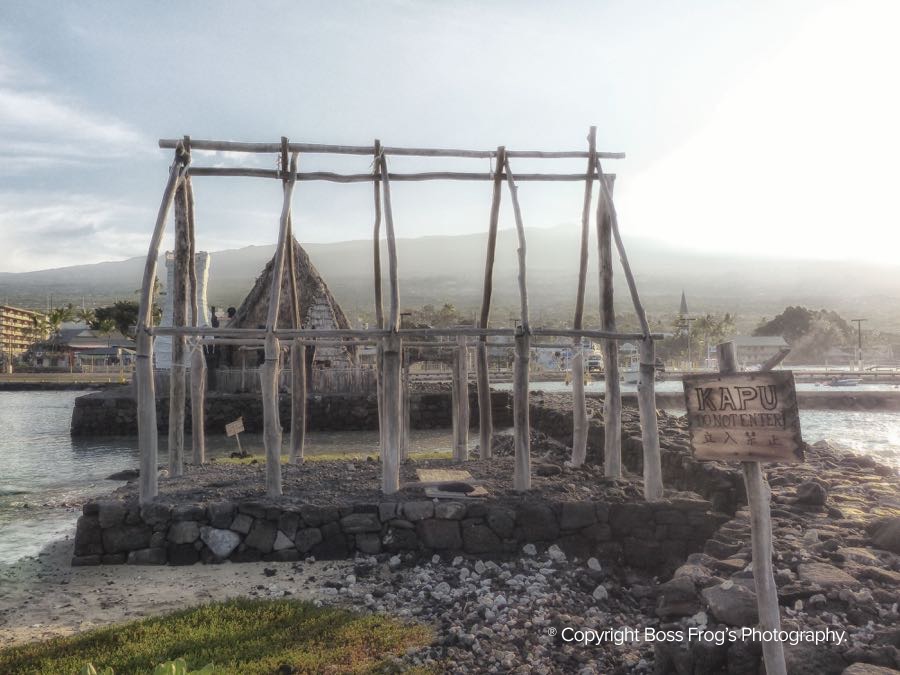 When it comes to Kona beaches, Kukio is extra special because it is so quiet and out of the way.  Parking is limited, and visitor entrance is controlled by the Four Seasons Resort Hualalai.  Restrooms, outdoor showers, and trash cans are located near the parking lot, and there is a picnic table or two on the beach.  When space is available in the lot, the resort will give you a parking pass as you drive through the gate.

Because of this wonderful attention to detail, when you arrive on the beach, the place feels deserted.  I don’t know about you, but when I imagine relaxing in Hawaii, I picture a gorgeous, quiet beach.  Kukio is definitely not for snorkeling – it’s way too shallow, rough, and rocky, but you can see marsh birds and sea turtles on this Kona beach.

A beautiful boardwalk meanders through a small wetland that hosts all sorts of cool birds.  If you’re anything like me, the sight of interesting birds gets your heart racing and your body still.  I saw black-crowned night herons – one of the largest resident Hawaiian birds, in the marsh here!  When it comes to sea turtles, there are a lot of them plowing through the waves at Kukio.  Of all the Kona beaches, some turtles favor this one to climb out on and bask in the sun.  I took some great photos of one resting turtle using my zoom lens – again, because the place is so quiet, and there was no one else around.  As you can imagine, this Kona beach is a great place to meditate. 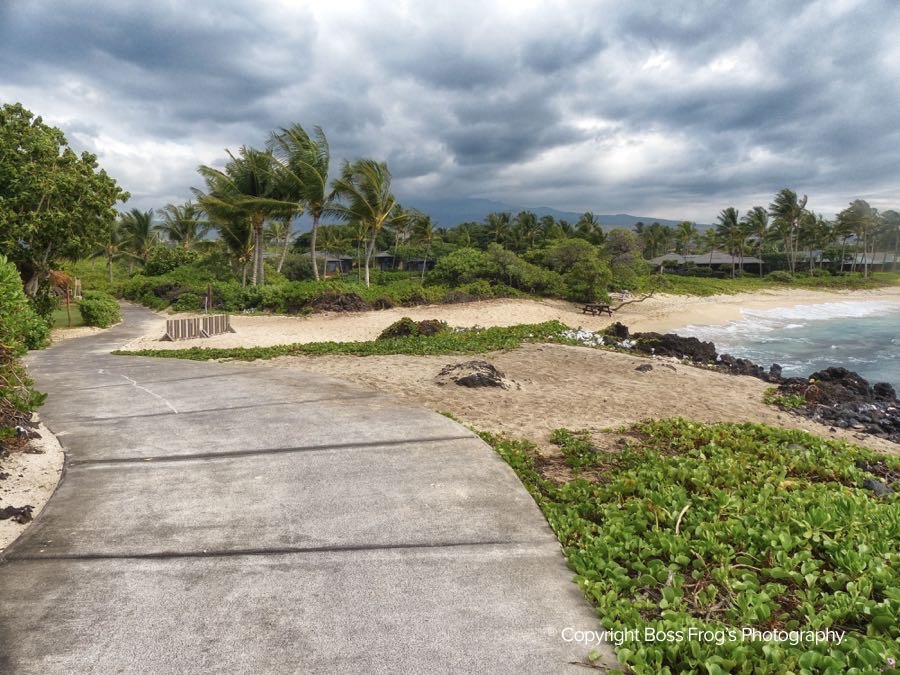 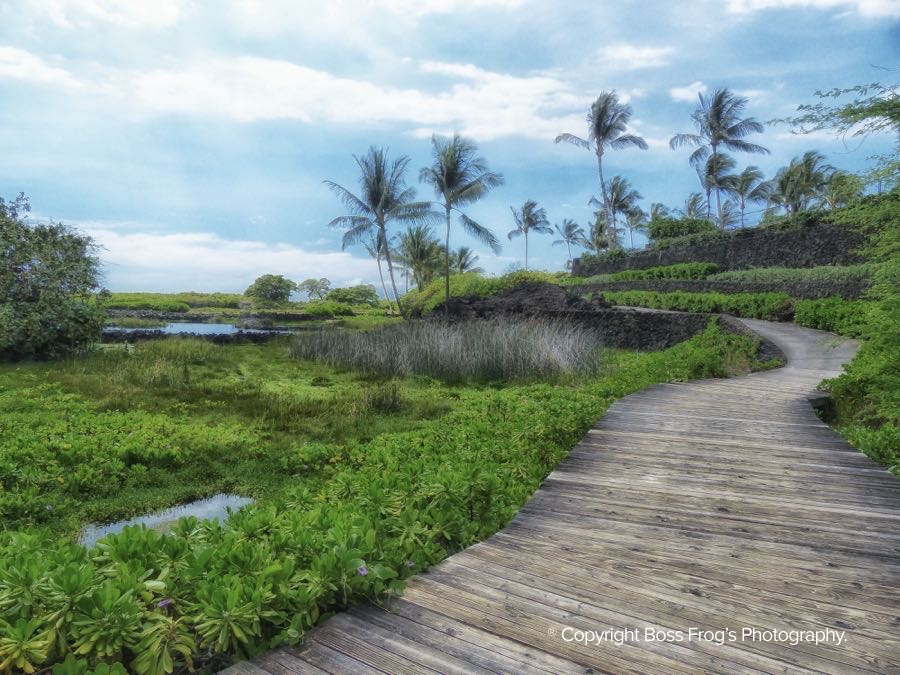 In English, Pu’uhonua O Honaunau means “place of refuge.”  If you’d broken a serious kapu in ancient Hawaii, and you had time to make it to this Kona beach, you were considered safe; you could not be put to death for your transgression.

Like Kealakekua Bay, Honaunau is a protected area today – a place of refuge for marine life!  The reef and fish communities benefit quite a bit from these protections, which makes this state park a wonderful snorkeling site.  Sometimes, Hawaiian spinner dolphins enter the bay!  If they do, make sure to let them come to you, rather than the other way around.  They’ve been out hunting and feeding all night, and they need their rest.  Thanks!  Although this Kona beach is the southernmost on our list, it tends to be quite popular once the island sun climbs a bit (around 10 am).  Try to get there earlier for better parking and more quiet time.

It’s easy to spend an afternoon at Honaunau.  Beyond snorkeling the bay, you can explore the Visitor Center, gaze at the preserved temple and burial sites, and take a look at the royal fishpond.  When it’s time for dinner, you can learn more about the Islands’ past on the Kona historical dinner cruise, which leaves from the Kailua-Kona pier in Kona town.

While satisfying your appetite and floating along the Kona coast, you’ll learn about the place of refuge, Captain Cook’s encounters in the islands, and the back story of the Kingdom of Hawaii.  How did Hawaii shift from a kingdom to a protectorate to a territory to a state?  And why is Britain’s Union Jack on Hawaii’s state flag?  Learn those answers and more, including the fact that King Kalaniopu’u – king of the Big Island and uncle of Kamehameha the First, was laid to rest in Honaunau.

No matter which Kona beach you choose to visit on your Big Island vacation, we predict you’ll have an incredible time.  Remember to pack your reef-safe sunscreen, find your snorkel and beach rentals at Boss Frog’s in Kailua-Kona Town, and enjoy yourself! 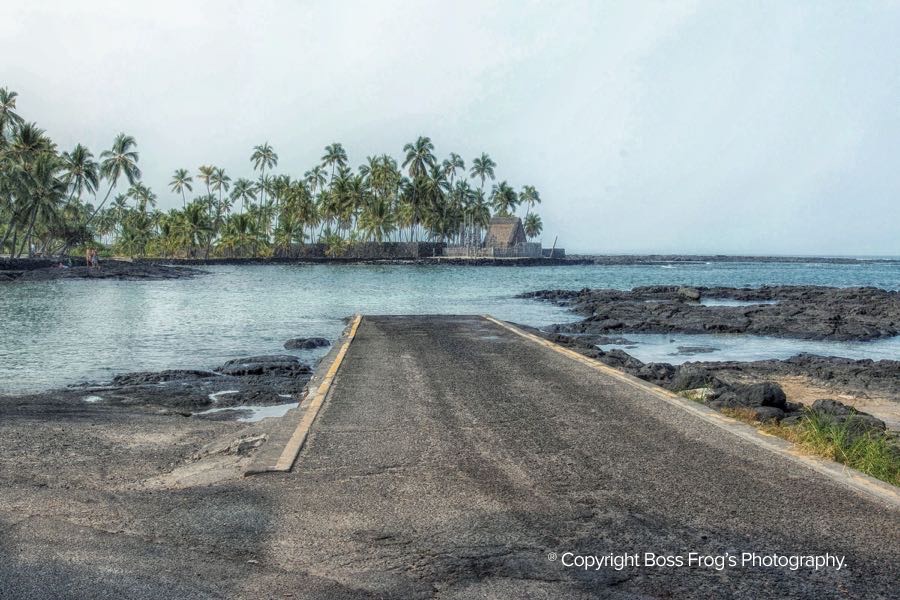 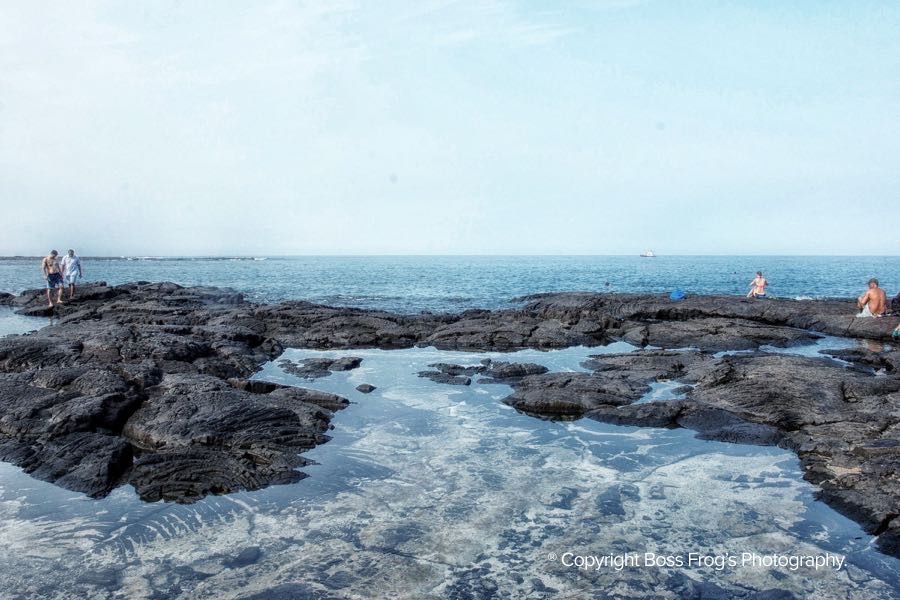