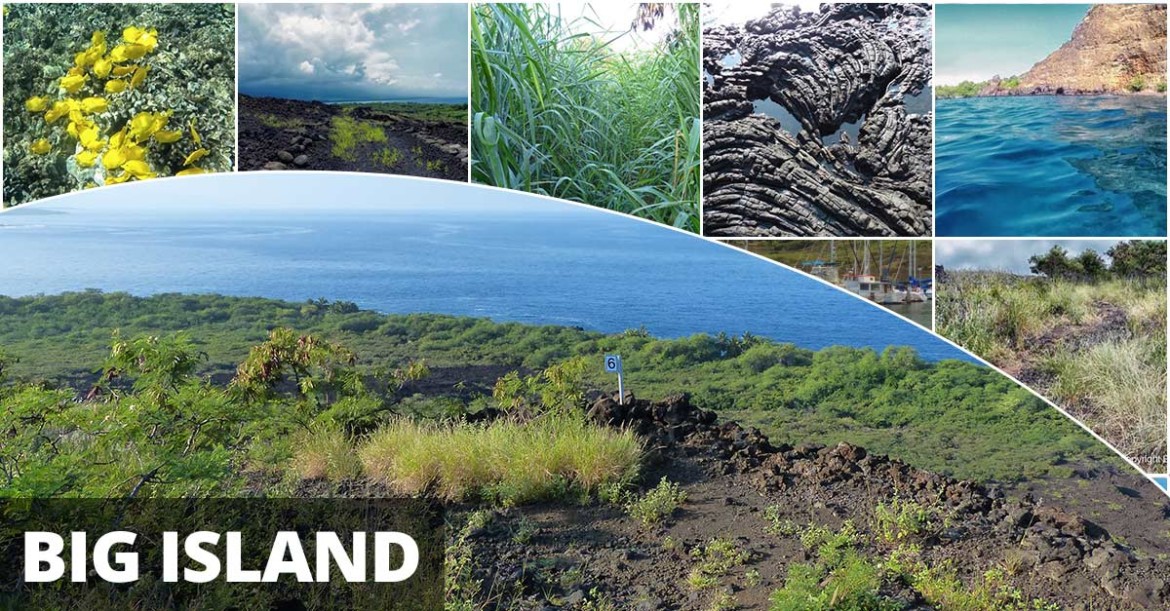 They say if you want to become an expert in something, you have to do it for at least 10,000 hours. I haven’t actually logged all the time I’ve spent underwater, but if there were anything besides breathing, sleeping, and eating ice cream at which I might be considered an expert, it would be snorkeling in Hawaii. This fantastic hobby has provided me with the quiet and marine life observation time I require to remain a happy person on this planet. Not too long ago, the sea stars must have aligned, because I found myself snorkeling beautiful bays and hiking trails like Ka’awaloa, but for work!

I am part of the team at Boss Frog’s. Our shops offer beach rentals, snorkel rentals, bike rentals, discount activities, and fun retail items on three Hawaiian islands – Maui, Kauai, and the Big Island. This geographical fact is how I ended up in Kona, gathering details and footage for our beach pages, videos, and social media. (If it helps at all, I did work about 45 other jobs before this one came around.) While canvassing the Kona beaches, I found that Kealakekua Bay is one of the most vibrant snorkeling sites on the coast.

The beautiful bay, which stretches for 315 acres, was given marine preserve status in 1969. The vibrant coral reef habitat looks as it does partly because it is protected, and partly because it is so difficult to reach. There are only three ways in: you can take a boat tour, paddle in by kayak, or hike to the bay along the 3.6 mile Ka’awaloa Trail. (That’s pronounced “kah-AH-va-low-ah,” by the way. There is a brief pause called a glottal stop between the first and second syllables.  When you look at the word, you’ll see that the need for a pause is indicated by an okina.  Although the okina may look like a punctuation mark similar to an apostrophe, is considered a letter in the Hawaiian language, and its function is altogether different.) 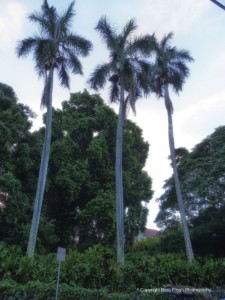 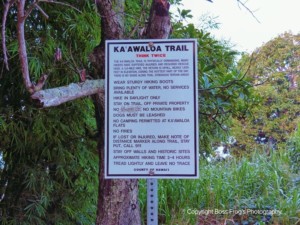 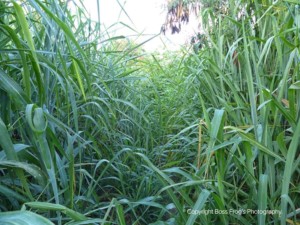 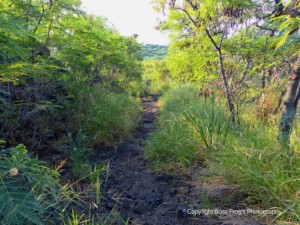 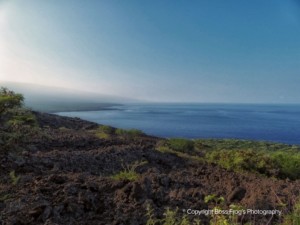 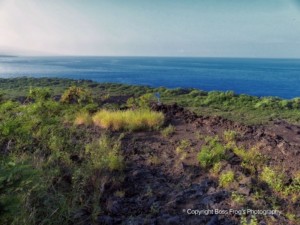 Our Kona shop associate Joy had told me a bit about the hike, so I knew that a) the Ka’awaloa Trail was extremely hot, and b) Joy never sent tourists to the bay that way. I considered myself to be in shape just then, and I wanted to save the company money, so I decided I’d take the trail. Before first light, I packed my food, drinking water, and snorkel gear, and I left the hotel to find the trailhead.

After following the advice of my GPS without success, I stopped at a gas station to buy more water, and to ask where I could find the trail, please. The station-keepers patiently explained that I must look for the royal palms down the road; the trailhead was across from them. (I don’t know about you, but I love getting directions in Hawaii!)

I located the palms, parked on the roadside, and found the Ka’awaloa trailhead. I had dressed in knee-length shorts, a loose long-sleeved shirt over a tank top and bathing suit, a Boss Frog’s baseball cap, and sturdy sneakers I’d broken in long ago. Soon after starting down, I learned that long pants would have been a better choice. High stands of sugar cane – each gorgeous green blade sharp as a razor (or at least a vengeful sheet of paper), grew over the path on both sides. Moving through the grass, I quickly drew several thin cuts along my calves.

The rocky Ka’awaloa Trail alternated from very steep to completely level. Shade was almost nonexistent, and the humidity was very high. At one point, alone on the path, I heard the sound of something heavy making its way through the foliage. I froze, realizing that at this early hour, there could easily be wild pigs nearby. I also determined that I didn’t know what to do if a pig and I should meet. Feeling foolishly unprepared, I quietly took out my phone to search the terms “what to do wild pig.” There was indeed reception, and after a bit of research, I had created my plan: stay calm, move slowly, and let any groups of pigs that I saw stay together. Easy! There was a coral-polyp-sized chance I’d be gored, but hey – I was having a great time, and I’d handle anything else as it happened. 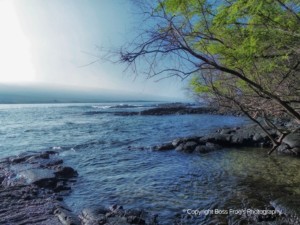 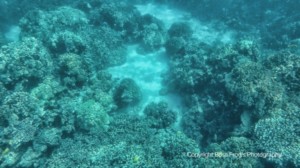 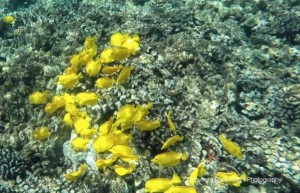 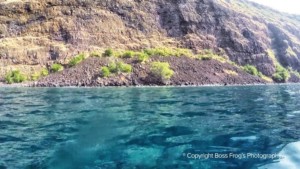 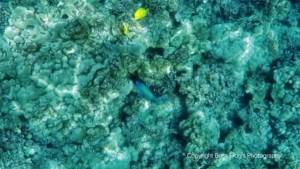 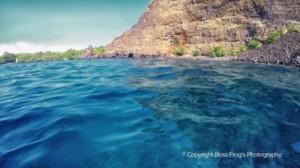 I did not end up seeing any pigs, and when I made it to the coast, the ocean views were just spectacular! The stony path winds along the edge of the seacliff for quite a while, and I enjoyed looking back to see how far I’d come. This trail is divided into eight sections. After hiking each one, you are rewarded with an appropriately numbered sign. I must say, I was quite relieved when I finally came upon the “8” stemming from the igneous shoreline of Kealakekua Bay. I was sweaty, happy, and positively ready to snorkel!

I put on my rashguard and swim shorts to protect my skin from the sun, and I slipped into the bay. The salt water made its way into the cane-grass cuts I’d forgotten about. I winced at the initial sting, and then forgot about that, too. Ducking my head beneath the surface, I could see that this place was all that I’d hoped for, and more. The water was entirely clear, and I could see tons of coral! (I realize that “tons” is not a scientific term.) The visibility in Kealakekua Bay was better than any other Kona beach I’d explored. Having lived in the Islands for many years, I knew that the water wouldn’t be this clear every day, so I was especially stoked. I powered through the sea, parting the waters before me a microsecond at a time. It felt so good to be swimming!

I headed south, exploring along the bay’s left edge. I came across so many different species of fish! Black triggerfishes schooled near the surface, tossing their fins back and forth like banners in the wind. A huge porcupinefish cruised just outside the reach of my camera lens. Although I didn’t get a good shot, I was able to imagine his completely adorable fish face; to humans, porcupinefish always look as though they are smiling. I also encountered my first big longnosed butterflyfish in its dark form, and I was able to film soldierfishes for the first time ever! Pretty good for an over 10,000 hour aqua-veteran, right? If you snorkel for the first time in Kealakekua Bay, you could end up bubbling with marine memories for life.

I didn’t want to leave the water, but I knew I had to hike back up the hill. I took off my fins and climbed up the ladder that was hanging from the concrete block in front of the Captain Cook Monument. (To learn more about the historical context surrounding the British circumnavigator, take a look at our detailed description of Kealakekua Bay.) 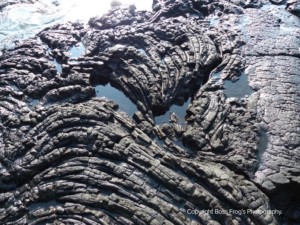 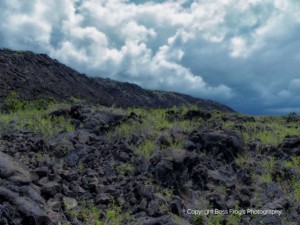 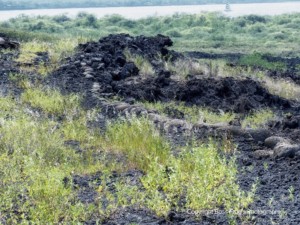 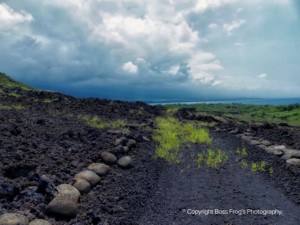 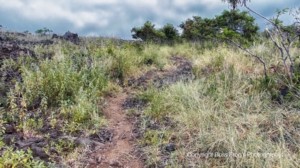 Going back up the Ka’awaloa Trail was, unexpectedly, a real challenge for me. It’s too bad I couldn’t have somehow started the day with that climb. The sun beat down, the hot rock beat up, and I tried to conserve my drinking water. I had about half a liter left, and I’d been walking for a half hour, when I realized I’d somehow gone the wrong way on what I thought was a single path; I hadn’t yet moved up at all! I was now in the middle of a huge field of dark lava formations and crumbly rock. I sat down to rest and recoup my confidence.

When I made it back to the proper path, I took note of the fork there, and I sat down and rested again. Just then, a woman walked up the trail from the bay. She was intently focused on her cell phone conversation, and as I watched, she started along the path I’d just returned from.

“Hey!” I yelled sharply after her. “Are you heading back up?”

She nodded, covering the phone’s mouthpiece with her hand.

“It’s that way,” I said, indicating the right fork with a jerk of my thumb. “I just went the other way. That’s not the way.”

“Thank you so much!” she called, and then she sprang up the stony path like a mountain goat with rollover minutes.

I also headed up the hill, but I was more like a frog! I took short journeys with rests in between, and I sang a lot for courage. Mostly, I just took breaths, sipped the water, and climbed the steep, steep, steep mountain. Several hours after taking that right fork up the Ka’awaloa Trail, I made it back to the car. I had saved my last sip of water for the end, so I drank it, and then I did a victory dance.

Long story short, Dear Readers? Unless you’re a very experienced hiker with vacation time to kill, I highly suggest taking a boat to snorkel Kealakekua Bay. But you could have just asked Joy for that advice, right?

I’ll sea you next time.  Aloha for now!