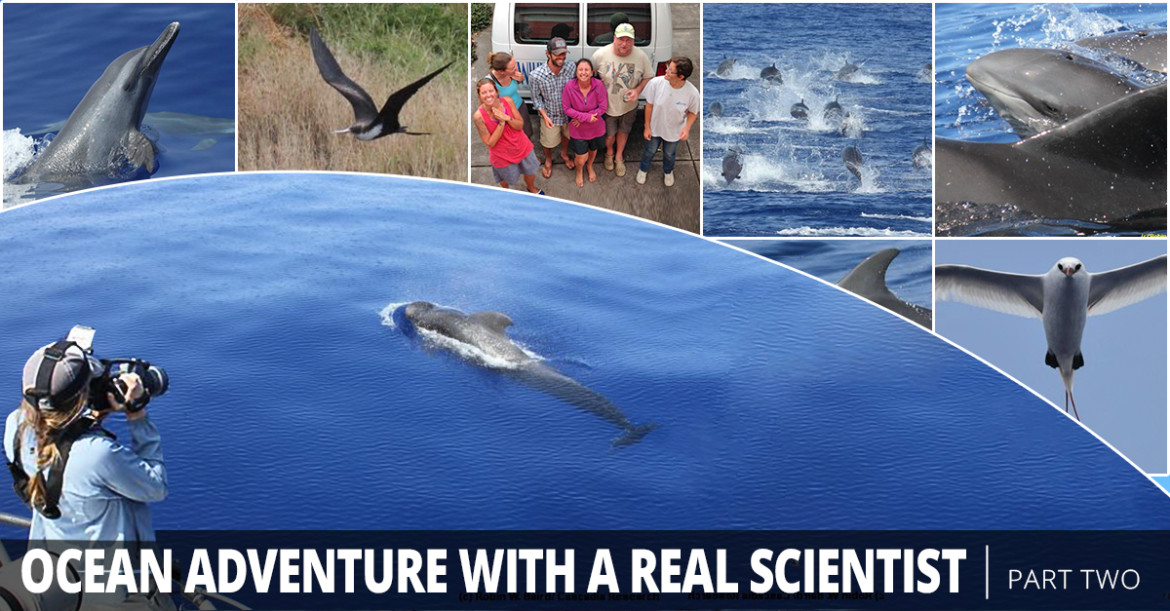 At the end of our last episode, you left me standing on Robin Baird’s marine-mammal-spotting vessel in the early morning light, cruising off the coast of Kona as a brand-new, short-term research assistant.  I’d been fooled by waves and spray, thinking I had seen signs of whales or dolphins, but then . . .

Something real was spotted, and we slowed down and stopped, rocking back and forth.

I could hear them breathing just off our bow — strong, quick breaths out, without the whistle you’d hear with a humpback. (That makes sense, since pilot whales have one blowhole like all toothed whales, but humpbacks — baleen whales — have two nostrils.)

At that time, it was my job to check the ocean all along the left side of the boat, so I kept it up.

“Is this the first time you have seen pilot whales?” Robin asked me.

“Yes,” I said, wanting to see so badly that I was trembling, but continuing to search my swath of ocean as promised. There may have been other species nearby!

Some of them were holding still, right there at the surface! Longer, darker, and heftier as adults than bottlenose dolphins, pilot whales have a very short beak, and a forehead that bulges out a bit over it. Robin said that it is believed that pilot whales continue growing until they are 36 years old. I chuckled, and squirreled that little fact away.  I was about to turn 36, myself.

Later on, we encountered a large group of spotted dolphins — my first time seeing this species, too! The individuals glided quickly through the water, surfacing and breathing alongside and beyond the boat in all directions. There were adults and at least one baby (calf) in the group. I got a few glimpses of the white tip on the end of their beaks, something I had seen before, but only in much-admired photographs. They were breathtaking, so I held my breath and watched them swim. The dolphins were so strong!

One goal for this trip was to tag a spotted dolphin. When one of them was close to the bow, Daniel lay down, wrapped himself around and beneath the prow, and reached out with the tagging gun. He tried to get a proper line of sight to deploy a tag, but no dice – even as we sliced through the water, the dolphin shot away. 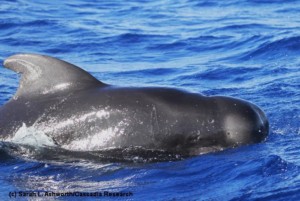 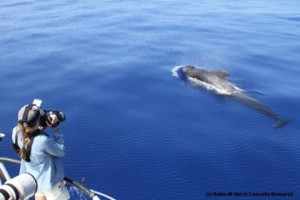 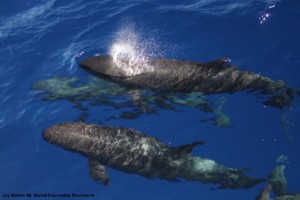 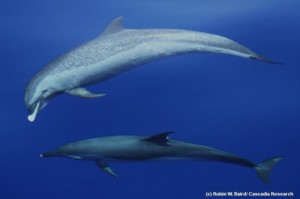 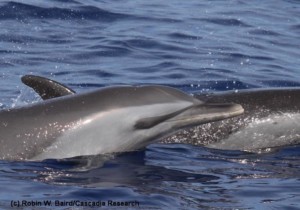 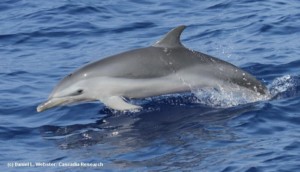 After our encounter with the spotted dolphins, I came to terms with the fact that I was totally seasick. I was quite embarrassed, and I apologized. “You should have told me you were prone to seasickness,” Robin said. “I myself am.”

I felt silly for having omitted that detail, but I thought if I’d said anything about my history of seasickness, I might not be allowed to go on the trip. I had simply hoped it wouldn’t come up, but the waters were rough, and we braked for dolphins. Though it hadn’t happened on porpoise, my fate was sealed.

I managed to find a semi-comfortable sitting position with my back to the starboard railing, wedged between a cooler and a very clean trash can. I nibbled on Saltines, sipped water when I could, and tried to keep my eyes on the deck and the rest of my body out of the way of the research. Everyone was sympathetic and understanding.

Kim wrapped ice in a scarf, and handed it to me to press against my face and neck, in order to take my senses off the nausea. “This is the scarf I got in Indonesia,” she told me. “You can puke on it; just don’t lose it, okay?” I nodded in thanks and held it tight. The cooling strategy worked incredibly well.

20 minutes before our return to land, I felt stable for some reason, so I sat on top of a cooler on deck and sang sea songs with happiness. My voice could not be heard above the outboard motors, but I lifted it anyway to belt out “Fathoms Below” from Disney’s “The Little Mermaid,” Billy Joel’s “Storm Front,” Jimmy Buffett’s “Hula Girl at Heart,” “Why Should I Cry For You?” by Sting, and the few lines I remembered from John Denver’s “Calypso,” the song honoring the legendary research vessel and team of Jacques Cousteau.

Now in 2017 (two years later), I’ve gotten to know a brand-new vessel with the same name – the triple-deck floating playground Calypso that takes Maui visitors Molokini snorkeling!  I love how looking back, you can see the past dovetailing so gracefully into the future.

We returned to the harbor in the middle of the afternoon. My miserable belly believed we’d circled the entire Big Island, but we had actually outlined a large rectangle of ocean along the west coast.

There are long stretches of time when it’s just ocean out there, yet these researchers were hardworking and vigilant every minute on the sea. I was continually impressed by all of them. During the hours I was – ahem – not available to observe, many seabirds were encountered, but no cetaceans (besides the initial pilot whales and spotted dolphins) showed themselves. 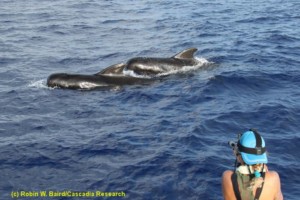 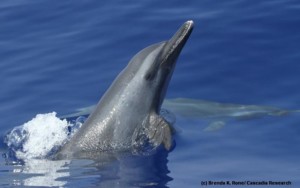 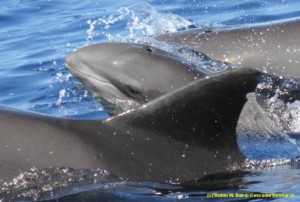 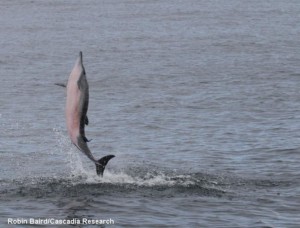 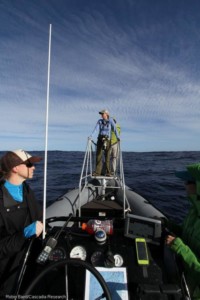 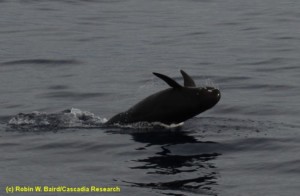 The original plan was for me to join the team on the boat the following day, but as you can imagine, I opted to stay home and recover.

Early the next morning, the team packed the van like clockwork and drove away into the darkness. I smiled, waved goodbye from the driveway, and went back inside to sleep. I am not ashamed to admit how much I enjoyed that downtime.

“It was okay,” Kim said, seemingly disappointed as she lugged equipment back into the house.

For a moment or two, everyone pretended her assessment was true, and then the room erupted with excitement:

“There is usually one day on a research trip that really makes it, and this was the day!”

“Okay, we saw Risso’s dolphins — a group of ten. That species has a really large personal space, so they have to be approached carefully, and we actually tagged one! It’s the first one ever tagged in Hawaii, and it was only the tenth time Risso’s’ have ever been encountered here by our research group!”

“We were able to tag a spotted dolphin, too! The tag landed on the top of the dorsal fin.”

“We felt really bad that you weren’t there with us.” 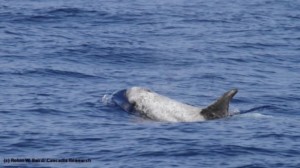 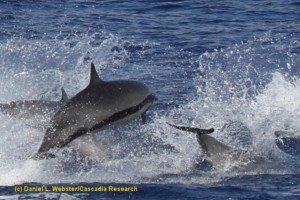 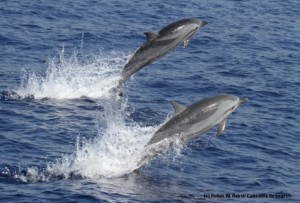 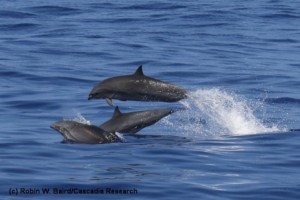 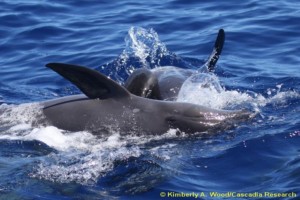 I grinned and applauded for them as they recounted the day’s events, and also I noticed that one member seemed to be feeling some pain in her shoulder. I’d been a massage therapist for seven years, so I asked if she’d like me to help ease the issue. She readily accepted, so I worked with her and all the others for about 20 minutes each. I was delighted to be able to contribute to their well being, since I wasn’t much help at sea the day before.

As my two days in Kona came to an end, I thanked Robin and said my goodbyes. The scientist kindly remarked that I was good company, despite the fact that I threw up all the time on the boat. I laughed, and two years later his words remain a cherished compliment.

I have since discovered how helpful Dramamine can be.  After all, how else could I hang out on the Calypso, Quicksilver, and Malolo?

Robin’s ongoing research on dolphins and whales in Hawaii is seriously epic, isn’t it? Discover more about it on his Facebook page and website, as well as in his new book.

Hawaii Ocean Project’s snorkeling tour and dinner cruise out of Lahaina Harbor both support Robin’s work, as does donating directly.

Thank you for reading, my friends.  I’ll sea you next time!

*Except for the photograph of Robin Baird, his research team, and me (the writer), all photos were taken under NMFS Scientific Research Permit 15330. 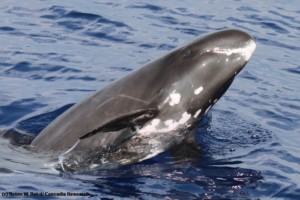 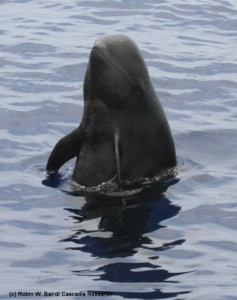 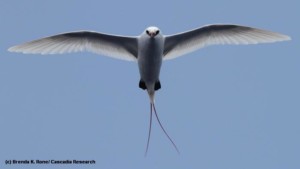 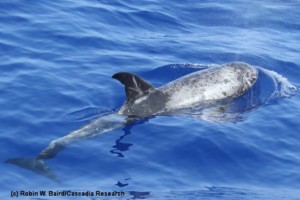 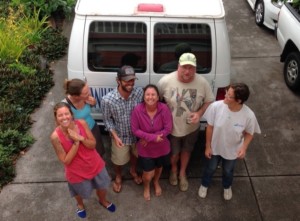 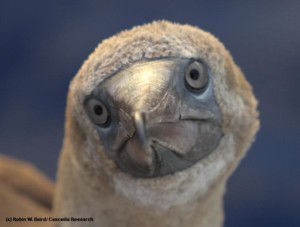 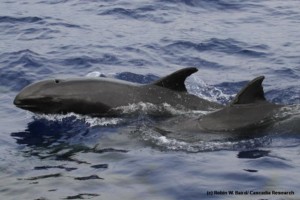 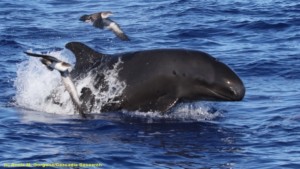 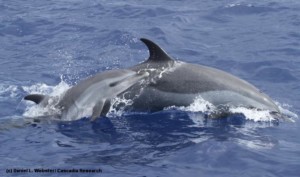